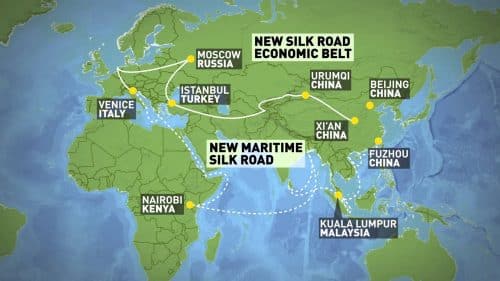 The infamous Silk Route, which extended all the way from China to the Mediterranean Sea was a crucial part of the economy of the ancient world. It was called the ‘Silk Route’ because the trade route was setup mainly for the purpose of meeting the demands of Chinese Silk in Europe. It was travelled upon by many famous travellers whose works shine light upon this route like Marco Polo (13th – 14th Century) who was also known as the ‘Silk Road Traveller.’ It (Silk Route) was probably the first step towards what we term as Globalisation as it had united the west and the east.

Moving to the present, China has launched an initiative called ‘One Belt, One Road’ (Referred to as OBOR henceforth), similar to what the Silk Route was; let us look at what this massive project is about.

OBOR is considered to be Xi Jing Ping, the Chinese President’s most ambitious project. It focuses on improving transport and communication links between the continents of Asia, Africa and Europe. The project focuses on land as well as maritime routes. The project will definitely play an important part in boosting the domestic economy of China, as well as a bargaining chip in economic diplomacy between China and other countries. OBOR will help in increasing the regional cooperation of Asia and South Asia. It will also help the many developing countries who are participating in this project will also receive a boost to their respective economies

India opposes the OBOR project of China, it has stated many reasons for doing so. One of the main reasons for the opposition is that a certain section of the OBOR, called the China-Pakistan Economic Corridor (CPEC) passes through Pakistan Occupied Kashmir (Read the story about P.O.K. here). India considers the project as violation of the sovereignty of India and her territory. India’s stance on the OBOR is acceptable, but India shouldn’t reject the idea of OBOR wholly .

Experts may view OBOR as China’s tactic of accessing the markets of the participating countries in this ambitious project by coercing them into accepting the project. But I believe that it is vital that this project receives maximum support; in an increasingly hostile environment between nations in Asia and South Asia. Many political leaders around the world are advocating more on withdrawing from global relations and increasing isolationism. Like United Kingdom’s exit from the European Union or Donald Trump’s policy of closing the borders of United States to immigrants by increasing requirements of work visas (H1B visas) and stopping all flights from Middle East countries.

One Belt One Road is estimated to be completed in a time period of 20-30 years and will cost around $1 Trillion (US). It is a long time and large amounts of resources will be required to complete it; however, the return on the investment for the participating countries will be enormous and therefore India should also reconsider its stance on the OROB project as it will help in improving relations with China which have been quite strenuous in recent times. Also India is compromising on the bigger image for a regional, bilateral conflict and will lose out on the benefits the project will provide two or three decades down the line.

I hope the Government of India will rethink its stance, this will be opposed by most citizens of the country as it hurts India’s image internationally, but opposing OBOR also makes India look like a child who is sulking because he/she did not get something. A country needs to function taking short term as well as long term goals into account when framing their foreign policy and stating their stances on various issues and policies around the world.